How does someone whose background is in law and advocacy for refugees and survivors of human trafficking get into designing and manufacturing children’s shoes? A fair question, for sure.

Lisa Nguyen won a worldwide talent search on Vietnamese Idol 2007 and became a host for Asia Entertainment Inc.’s variety shows, as well as producing a weekly show called Life+Style for the Saigon Broadcasting Television Network. At the same time she was studying law through the University of Sydney, earning a Master of Law in 2008. 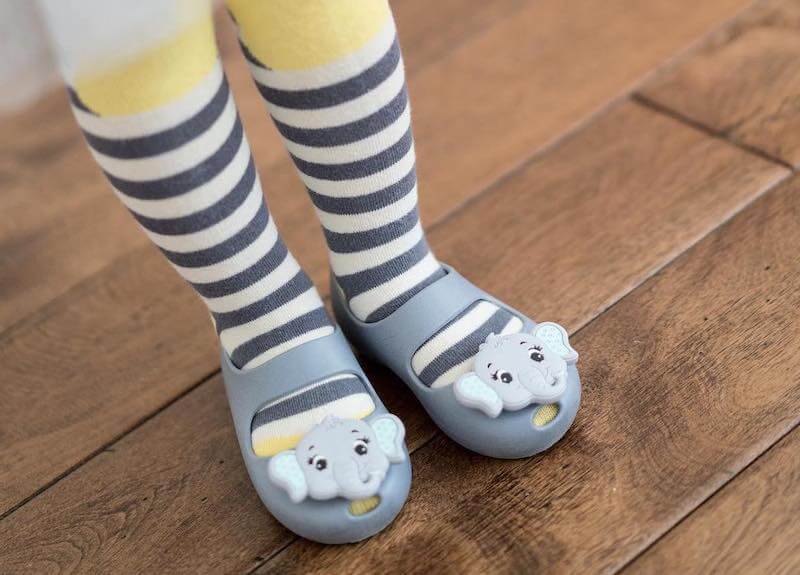 She went on to establish the Senhoa Foundation, a program that supports survivors of human trafficking in Cambodia. Nguyen oversees implementation of field programs, is in charge of donor relations and fundraising and provides leadership to staff, volunteers and partners in the US and Cambodia. Over the years she also volunteered with several NGOs that provide legal services and advocacy relating to refugee protection.

But then Nguyen became a mother. Parenthood comes with numerous unexpected problems, most of which are, thankfully, small issues–annoying perhaps, but not life threatening or terribly serious. Telling her story on the Baubles + Soles website, Nguyen recalls how frustrated she was that she needed to buy numerous pairs of shoes for her daughter in order to match different outfits. It was particularly annoying because she knew that her daughter would grow out of most of the shoes before they were really used.

What if there were a shoe that had interchangeable “baubles” so that one pair could be used to go from playground to school and then to a party? Since there wasn’t such a shoe on the market, Nguyen enlisted her husband and together they worked for almost two years on research and design. Baubles + Soles was officially established in 2017. The shoes are made in the USA from a patented material that is 45% soy based by weight and 100% vegan. The shoes are available in toddler sizes 5-10, come in 6 colors, and are water resistant, machine washable and slip-resistant. The one-piece construction eliminates the need for toxic glues, buttons, Velcro or buckles.

The Nguyens teamed up with Voth Engineering, a premier Canadian firm, to design a push-and-twist lock for attaching the baubles. All sizes of the shoes come with the same lock so that baubles can still be used as the child grows into a larger size. Perhaps most impressive is the fact that the shoes are fully recyclable! Well-worn shoes can be returned to the factory. If they are free from contaminants they are used to produce new Baubles + Soles products. Otherwise they will be processed and recycled for use in non-apparel goods. Update: Baubles + Soles is no longer in business as of January 2023.

Slime was first made for children. It came in a plastic trash can and was squishy, oozy and a putrid color of green. Kids...
Clothing, Wearables & Accessories