Any good stand-up comedian could probably deliver a reasonably good joke involving soup, but it’s likely that not too many could deliver an actual bowl of healthy, plant-based and locally sourced soup. But that is just what Sara Polon did. In 2008, living in the District of Columbia, working in the travel industry (which she hated) and trying to fulfill her life-long dream of being a stand-up comedian, she created Soupergirl. Choosing as her partner her most ardent fan, her mother Marilyn Polon (now known as Soupermom), the mission was to provide an alternative to the canned soups that could be found in every grocery store, but that contained unhealthy ingredients, such as guar gum, maltodextrin, corn syrup solids and high levels of salt. Why soup? Soup is a complete meal in one bowl; it’s easy to reheat and has a long history as a comfort food and a cure for colds and other ailments. It’s adaptable to the seasons—steaming hot potato or butternut squash in the winter and cold spicy gazpacho in the summer—so it is possible to use fresh or recently harvested ingredients.

The Polons entered this endeavor just as the locally-sourced and healthy food movement was beginning to accelerate. Whether this was by design or just good luck might be up for debate. Sara freely admits “I dragged my poor mother out of retirement, and there you have Soupergirl! I didn’t over think it. If I had, I never would have started this business!” (Jen Owens, “Out of the Box,” 12/2/16).

Soupergirl was featured in a Washington Post article on 11/22/16, when staff writer Lori McCue chronicled her experience using the soups as a “cleanse,” a seven-day program that’s free of meat, dairy and processed foods. Customers get 20 individual soups and eat four per day at specific time intervals for five days, with two days eating a healthy, plant-based diet. The goal of doing this is to get a “jump-start” on healthy, plant-based eating.

Jen Owens of Sparklightpartners.com featured Soupergirl on 12/2/16 in the “Out of the Box” program. Having met Sara back in 2008, Owens said: “Soupergirl has grown from a local soup delivery to a soup making machine, with a professional kitchen, a store front, and shelf space in Whole Foods up and down the East Coast.”

Like any successful entrepreneur, Sara Polon worked very hard, at one time even delivering soup herself in her Honda Fit in the middle of a snowstorm. Her experience in comedy and her love of laughter served her well throughout those difficult early years. She told Owens: “You don’t normally think ‘funny’ when you think ‘soup.’ But I tried to change that. It also infused me with a sense of … chutzpah! If I can get up and totally bomb in front of a crowded room, surely I can start a soup business! Or something like that…” Sara Polon is passionate about encouraging healthy eating, which involves much more than simply knowing the ingredients. She focuses on supporting local farmers and educating her consumers about the sources of their food and some of the pitfalls of the standard food industry. She was greatly influenced by Michael Pollan’s book “The Omnivore’s Dilemma,” and became vegan several years ago. Besides overseeing the day-to-day kitchen and stores operations, she appears whenever possible at conferences or on-line programs to further her mission. She and her mother were at the Natural Products Expo East on 9/24/18, and Sara spoke on the importance of understanding the origins and handling of food at the Chesapeake Food Summit on 9/25/18. 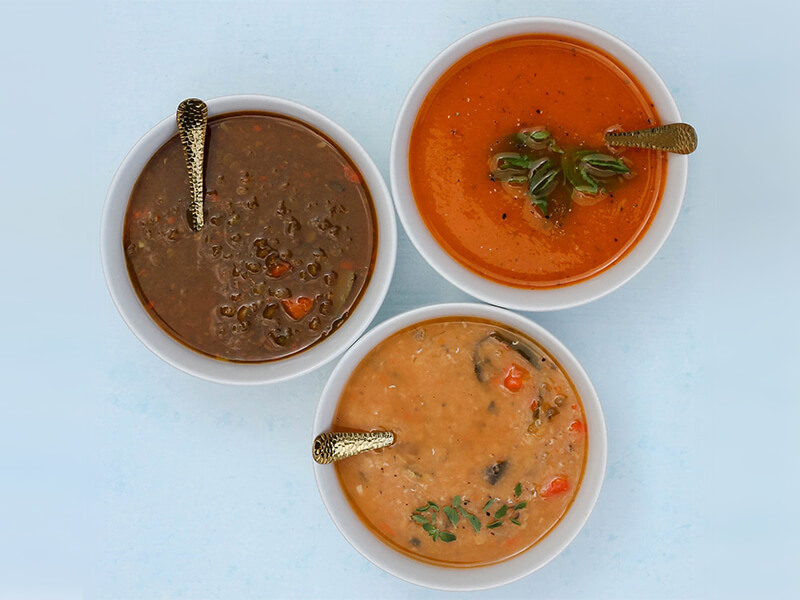 Soupergirl has two store locations in D.C.—one in Takoma Park and one in the Dupont Circle area. The soups are sold at Whole Foods and Costco locations throughout the East Coast. The soups can also be ordered through their website and they currently ship as far as Chicago. Appearing recently on TheHill.com show, “Rising” Sara explained their next step is to expand shipping capabilities all the way to the West Coast.