Tony Litwinowicz is an aerospace engineer who worked in research and development for helicopters, so it was a natural progression that he go on to invent . . . a hair cutting tool? Tony was an amateur barber before he was a professional engineer. His mother cut his hair when he was growing up, so when he went to college, he cut it himself. He did such a good job that his friends had him cut their hair. All went well as long as he could use clippers to shape a buzz cut. When he decided to go with a longer surfer hairstyle, it was a whole new ball game. His hair ended up all different lengths. Clipper guards didn’t help—they only went up to one inch, and since he never received proper training, there was no way he could cut hair freehand like the pros do. He needed a way to measure the hair while he cut it and created the HairFin, a guide for giving professional-caliber haircuts to men, women and children by allowing you to hold the hair in place and measure it as you trim.

Tony is a hobby illustrator and cartoonist, so he sketched out lots of design ideas. He is also a surfer and incorporated the fin into the design to provide stability as well as keep the hand a specific distance from the head while leaving fingers free to grasp the hair. Besides, the fin is a cool design. 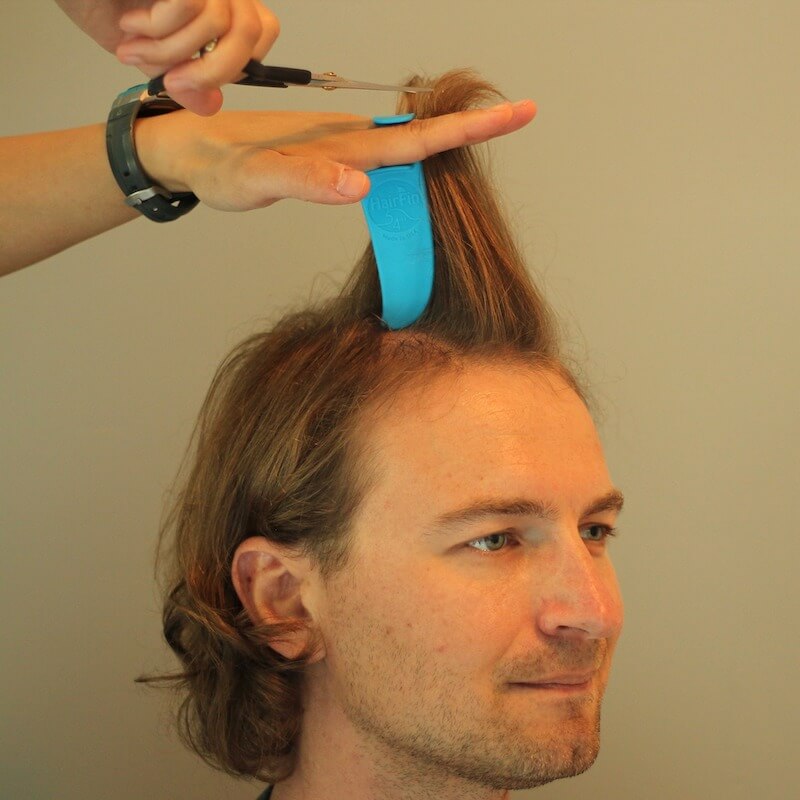 He bought a 3D printer that came with free CADD software, so he designed and corrected to his heart’s content until he had a prototype. Then he needed a manufacturer and found one right in his hometown, Darby, Connecticut. He was happy that he could support the local, but seriously diminished, manufacturing community. And he could be right on hand for every aspect of the product development, from mold design to final production. With Tony’s talent in graphic design and photography, he was a one-man band with designing the logo and producing instruction booklets and marketing materials.

How to Use the HairFin

Please see the instructional videos on the website for more detailed directions.

HairFin Is Merely the Start!

Tony has always come up with novel solutions to practical problems. (He has a bunch of patents from his time in helicopter R&D.) The HairFin is the first idea he had for a product that he felt so strongly about that he wanted to take it right through to production, which led him straight to an item on his “bucket list.” He had wanted to start his own business for a long time. Once he had HairFin, he founded Stoke Time LLC, a lifestyle engineering and design firm specializing in designing innovative consumer products.

Young King Hair Care is a line of natural, plant-based products that are made specifically for Black and Brown boys. From the ingredients to...