When one thinks of American fine-dining cuisine, the harsh environment of Afghanistan may not come to mind. For Kim Jung, Emily Miller and Keith Alaniz, the region is close to heart. That’s because the three co-founders of Rumi Spice, a company that sources one of the most prized spices in the world—Saffron—have spent so much time in the region. Jung, Miller and teammate Carol Wang are American military veterans who have, collectively, nine combat deployments in Afghanistan. Alaniz worked as a lawyer in the country with the Afghan Rural Enterprise Development Program (AREDP) and National Solidarity Program (NSP).

The team at Rumi Spice wanted to bridge the gap between Afghanistan and America in a new way—through the delightfully sweet-meets-bitter flavor of Saffron. They partner with rural Afghan farmers to bring the best quality, sustainable spice to plates around the world. The idea stems from a combination of powerful factors. In the area of Afghanistan that the Rumi Spice team are most familiar with, the economy is predominantly rural. Saffron is no easily-harvested spice; in fact, it takes roughly 150 beautiful crocus flower stigmas to produce just one gram of this exotic and flavorful spice. The spice itself is loved worldwide for its unique flavor, and loved by Afghan growers as a true staple of the region. Growing Saffron doesn’t interfere with other popular crop cycles, like wheat and barley. Unlike another ever-popular crop, the poppy, Saffron is said to provide 6x more income to farmers. Plus, the crop grows well in the arid climate of the Afghan region. It’s also cheaper in cost to transport than many other exported goods.

Rumi Spice allows local growers, including more than 300 hardworking women, the opportunity to run a thriving business, providing for their families and boosting their economic power. In turn, the brand brings this highly sought-after spice to the mainstream. You can now find the spice in many forms online and including Amazon—from premium Saffron Threads to a Paella Spice Blend. Even green tea with Saffron! Every Saffron stigma is hand harvested, dried and packaged by Afghan farmers. The result is a highly sustainable, pure product that bridges a small gap between two distant nations. 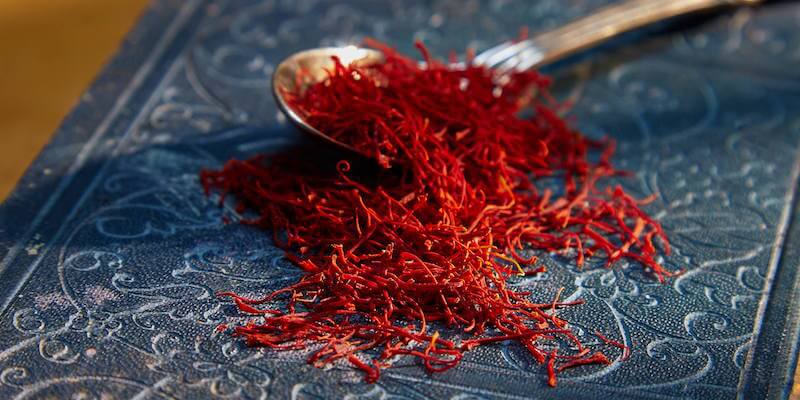 Rumi Spice has already made a buzz in the culinary world for its one-of-a-kind spice, and world-class fair-trade business structure. It is a Certified B Corporation, which as the Rumi Spice website explains, is “a testament to the company’s commitment to social and environmental ethics, transparency and accountability”. Their 2015 Kickstarter campaign, which led with the tagline “Afghanistan Veterans Cultivate Peace with Saffron” raised over $30,000.

So far, Jung, Miller, Alaniz and the rest of the team at Rumi Spice have received accolades from a number of media outlets including NPR, The New York Times, and Food & Wine. The brand has even paired with popular home delivered food service Blue Apron to be featured in a delicious Seared Salmon with Honey-Glazed Carrots & Saffron Potatoes recipe. With their dedication to sustainability and laser-sharp focus on taking care of the Afghan people, Rumi Spice will surely continue to be a top-ranking spice company with far-reaching environmental potential.