Alexiou Gibson founded The Transformation Factory as a continuation of his own personal journey and as part of his mission to provide products, in this case sea moss, that promote physical and emotional health.

Sea moss has been used for thousands of years for its medicinal properties. It became of critical importance during the Irish Potato Famine in the 1800s. The Irish suffered widespread hunger and a dramatic decline in population, until they turned to sea moss that had the same nutritional value as potatoes. Along the way, the food that saved countless lives became known as “peasant food,” and it was soon forgotten about when the potato crops recovered. In recent years, sea moss (aka “Irish sea moss”) has returned to its former glory (or surpassed it) for its nutritional benefits and environmental sustainability.

Alexiou is a former intern at NASA; winner of the Martin Luther King, Jr. Leadership Award; and a seasoned entrepreneur with a full service production company. When he was 19 years old and weighed more than 500 pounds, his physician told he would never see 30—no matter what. Multiple chronic conditions had progressed to a point of no return. Undaunted, he changed his lifestyle, including exercising regularly and adopting a vegan diet. Having transformed himself, he now wants to motivate and inspire others via The Transformation Factory.

The Transformation Factory’s wildcrafted sea moss is an organic, vegan superfood. “Wildcrafted” means it is harvested from its natural habitat in unpolluted waters on the coast of Jamaica. There, it absorbs more nutrients and is not sullied by chemical fertilizers or pesticides. After it is harvested, the sea moss is washed with spring water 3 to 5 times and put out to dry in the Caribbean sun for 1 to 2 weeks, then transferred to a vegan kitchen where it is blended in alkaline spring water and made into a gel that is flavored with organic fruits. 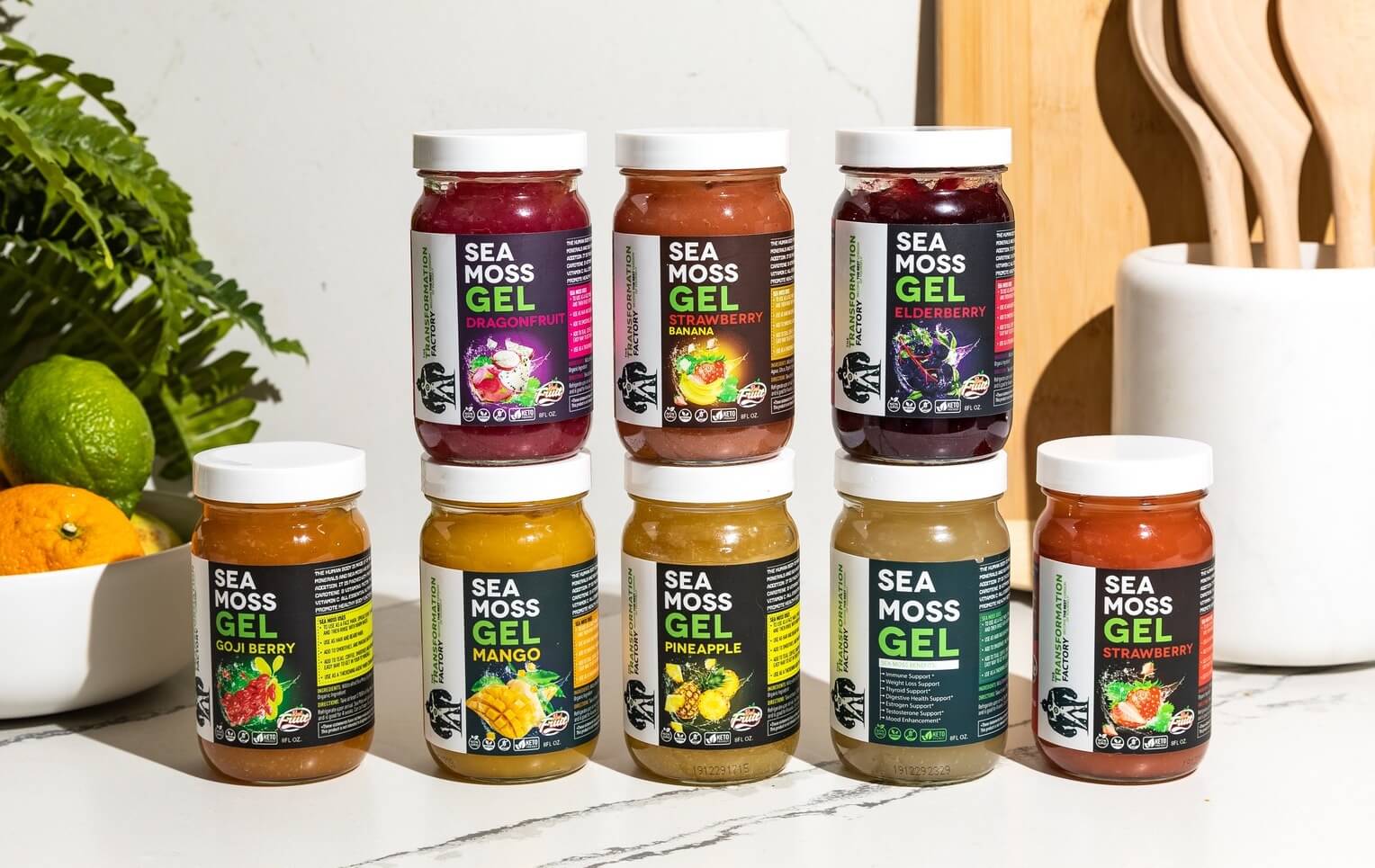 The capsules are raw sea moss with its vitamins, minerals, and antioxidants in a more durable and convenient form. The sea moss is delicately ground into a powder and encapsulated with sea moss. There are no fillers. They are 100% sea moss, 100% organic, and vegan, non-GMO, soy- and gluten-free.

Sea moss contains 92 of the 102 trace minerals found in the body. Of course, we get many of these by eating a variety of foods, but with our very busy lives, it is not always possible to keep a perfectly healthy diet plan. Sea moss can fill in the gaps and benefit various health problems.

The fish oils and fatty acids in sea moss help alleviate inflammation and swelling of the joints, as well as improving flexibility.

The anti-inflammatory properties speed up the recovery by promoting joint health, as other minerals boost energy and relieve fatigue.

An imbalance in thyroid hormones can result in a whole slew of unhealthy conditions, including muscle pain, extreme weight fluctuations, fatigue, hair loss, dry/flaky skin, and irritability. All of them are caused or aggravated by iodine deficiency.

Now, more than ever, we need to keep our immune systems in tip-top shape to lower the risk of infections. Sea moss is a superfood with a high content of amino acids, antioxidants, and vitamins that support the immune system and help fight off cold and flu symptoms. You can make your own sea moss scrubs for soft and glowing skin. They are a very effective way to exfoliate and remove dead skin cells, improve circulation, and decrease hyperpigmentation and rough, bumpy skin.

Go to Alexiou’s website, seamosstransformation, to find some delicious, fun recipes, such as,