Imagine this: You have an important business meeting. You have the perfect outfit: dark jeans, crisp button-up shirt, and the Nike sneakers that will put the exclamation point on your fashion statement. (You are in the film industry and the suit-tie-wingtips uniform does not work—ever.) Panic sets in—the pristine white on your sneakers is all scuffed up from getting banged around in the luggage between Los Angeles and Atlanta. You only have 20 minutes, and the only cleaning product you can find is hand sanitizer. It’s a messy, tedious job, and it’s good enough, but it’s not the poppin’ white you had intended. This scenario, more or less, happened to Chris Pavlica. After the interview, he called his buddy, Kevin Consolo, to tell him that, after 11 years of ideas, he had found a business for them. They would develop and produce an easy way to get the scuff marks, grime and smudges off of sneaker soles, midsoles and rubber logos—without applicators, brushes or sprays, without needing to wait for your shoes to dry. They would develop and produce SneakERASERS. 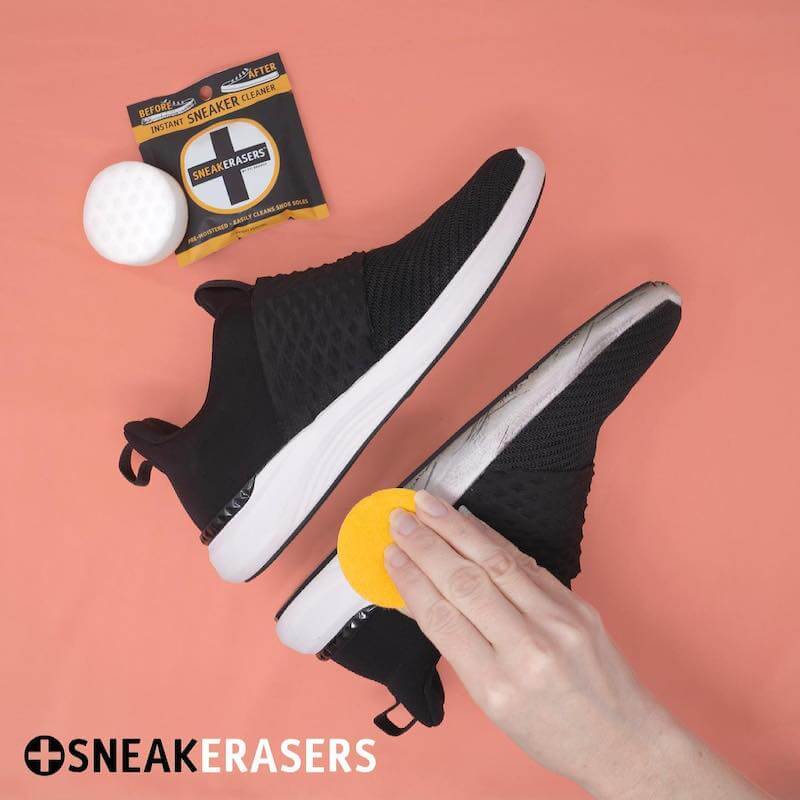 If either one becomes dry during use, simply add water to reactivate the cleaning power. Chris and Kevin met at Ohio University. They were on different career tracks, Chris in the film program, Kevin in business school, but they both loved golf and both were determined to be entrepreneurs. So they spent many nights tossing around ideas for their future business.

After graduation, Chris went west, to Hollywood where he worked as a film editor, director and producer for Atlas Media, Discovery Networks and Travel Channel, as well as films for custom theaters and brands such as Heineken, Coca-Cola and Ford.

Kevin went east to North Carolina where he climbed the corporate ladder in the adult beverage industry. He gained valuable experience in formulating business plans, retail strategies, merchandising, liaising with suppliers and buyers, and trade shows.

They kept in touch, never giving up on the idea of going into business together. Kevin was in as soon as he heard Chris’s idea. He flew to Los Angeles, and they spent months researching materials and manufacturers and developing formulas and prototypes in Chris’s garage. In three and a half years, they had a product!

They debuted SneakERASERS at a sneaker trade show in Los Angeles and sold out in two days. They then applied for the Walmart Made in America Open Call. Out of 10,000 applicants, they were among the 470 who made the cut and then were one of the 20 selected to film an “elevator pitch.” Yes, it was filmed in an elevator to be seen on Walmart’s corporate Instagram and Facebook pages. They met with buyers and soon were in 1,000 Walmart stores. Now, they are in 35,000 retail locations, including, in addition to Walmart, Kroger, CVS, Family Dollar, Camping World, and Golf Town. They are also on ecommerce sites such as Walmart, KrogerSHIP, and Amazon and have been featured on Good Morning America, The Zoe Report (a leading fashion media brand) and Zulily.

Chris and Kevin founded their company, FTI (“Free To Innovate”), with a mission to create innovative cleaning products. They have already expanded into AutoERASERS (for car exterior and interior touch-ups) and GolfERASERS (for clubs, balls, and shoes).