Have you heard the expression “hot as a Fourth of July firecracker”? That’s Little Rock, Arkansas, in the summer—sky-high humidity and temperatures that can reach into the triple digits. Sometimes the only relief is to get yourself into some nice cool water, whether at the community swimming pool, nearby lake or river or that secret water hole in the woods.

Tom Prestella, an Air Force pilot stationed in Little Rock, set up the lawn sprinkler for his little girl to cool off. It was fun at first, but you can only run back and forth so many times, plus she would have liked to splash around in a pool and play with her float toys. Tom’s “Eureka!” moment came as he walked past his pick-up truck. He had heard of the “redneck swimming pool,” a tarp put into a truck bed and filled with water. He could do that! Except the tarp fought him at every turn, until he finally hog-tied it into submission with a bunch of bungee cords and ropes. Not only an exhausting endeavor but a ridiculous-looking one. Adding insult to injury, the bungee cord hooks scratched up his truck.

Like many successful entrepreneurs before him, Tom thought, “There has to be a better way.” He found no other way on the internet, so he knew he’d have to do it himself. And that’s how Tom became founder and CEO of Pick-up Pools, operating it with his sister, Diana Baima, who keeps the company afloat when he’s deployed overseas.

The Pick-up Pool is made of durable 20 mil polyvinyl chloride (PVC) that has a patent-pending stretch to it so that it “hugs” the surfaces of the truck bed and stays in place over its corners (no ugly, abrasive cords and ropes needed). The floor, sidewalls and exterior flaps are welded together with radio frequency welding for a permanent bond that in impenetrable and resistant to tearing. When you are finished enjoying the pool, just open the convenient drain and the water flows out. You don’t even need to lower the tailgate. It was very important to Tom that the pool be American-made: The vinyl is manufactured in Virginia, and the pools are assembled in California.

It takes only a few minutes to turn your pick-up into a swimming pool. Pull the vinyl liner over the corners of your truck. It will conform perfectly to the design of the bed. Then fill with water. You can have a pool at the tailgate party, RV park, campground or simply relaxing in your driveway. Or in the more than 130-degree heat in Afghanistan. When U.S. soldiers emailed him for a Pick-up Pool, Tom gladly sent it. Summers in Afghanistan and Iraq were “been there, done that” for Tom. If the pool can hold up in a war zone, you don’t have to worry at those sometimes-rambunctious tailgate parties.

Maybe you are having a huge event and don’t need a pool. That’s where the Pick-up Pool does double duty. Put the vinyl into the bed of your truck and fill it up with ice. You’ve got the largest and most convenient cooler ever with enough soda, beer and any other beverages for all your guests.

Wide Open Eats, a life style website, listed Pick-up Pools as one the best camping accessories of 2017, and GadgetFlow, a curated e-commerce marketplace, gave it a five-star rating. 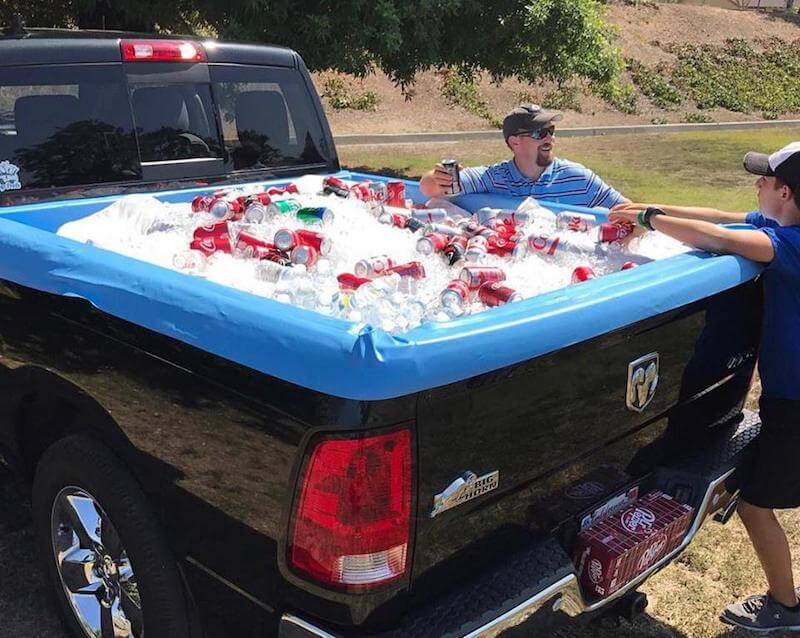 Did You Know?
A swimming pool on a truck is not a new idea. During the 1960s-1970s in New York City, on blistering hot summer days, a tractor-trailer hauled a swimming pool (30’ long, 7’ wide, 4’ deep), complete with three lifeguards, to various locations in Queens and Brooklyn for kids who had no access to a swimming pool. The “Swim-Mobile” parked along the street and was filled with water from the fire hydrants. Photos from that time show the kids having the time of their lives!